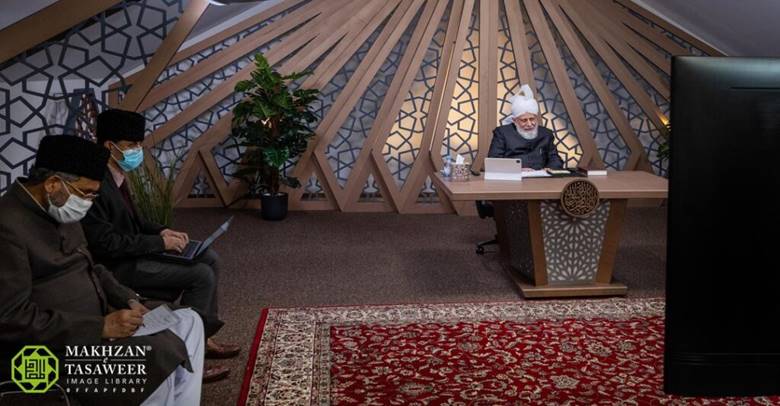 "Khilafat will not to become a monarchy" - Hazrat Mirza Masroor Ahmad

His Holiness presided the meeting from MTA Studios in Islamabad, Tilford, whilst the Ansarullah members joined the meeting virtually from the Nuur Mosque, in Wigoltingen, Switzerland.

Following a formal session which began with the recitation of the Holy Quran, members of Majlis Ansarullah had the opportunity to ask His Holiness a range of questions regarding their faith and contemporary issues.

One of the attendees mentioned that the Ahmadiyya Muslim Community is spreading rapidly and asked His Holiness which country would be the first to become Ahmadi Muslim and how the country would be governed.

"It is the blessing of God Almighty that the Ahmadiyya Muslim Community is spreading around the world. God Almighty knows which country would first accept the Promised Messiah (peace be upon him). Even if it is a small country, we certainly wish that majority of the people of a country join the Ahmadiyya Muslim Community. May Allah the Almighty enable our missionaries and those who take the message of the Ahmadiyya Muslim Community to the people around the world that they spread its peaceful message and people's hearts open up to its truth so that they accept the Promised Messiah (peace be upon him) and enter the fold of Islam under the flag of the Holy Prophet Muhammad (peace and blessings be upon him). I certainly do not know which country that shall be and what will take place; only Allah knows the unseen."

Replying to the question of how the country will be governed, Hazrat Mirza Masroor Ahmad said:

"The system of governance will continue to run as it is. Khilafat will not become a monarchy and nor will it run a system of governance similar to that of the Khilafat-e-Rashida. Khilafat is going to remain separate and secular governance will be running independently. This is what the Holy Quran points to as well. In Surah Hujurat of the Holy Quran, Allah the Almighty states that when two Muslim parties are at conflict with each other, you should make peace between them with justice and that those governments that bring about peace, they should then not resort to any vengeance or injustice. So, what this means is that there will be numerous Muslim governments and each one will be managing their own affairs. When it comes to the system that is Islamic and where there are Islamic rulings and on matters of obedience [to Khilafat] and in affairs of spirituality, those countries will turn to the Khalifa of the time for his advice."

Another questioner asked His Holiness how he envisions the Russia and Ukraine war may spread to other countries and how the message of the Ahmadiyya Muslim Community will spread after a world war.

"What we currently see is a beginning of the war. To presume that Russia has vacated a city and thus Russia has been defeated is not correct. Even Ukraine has warned against making such assumptions and that this is only temporary. It could even be a strategic move from Russia. So, to think that now Russia will withdraw from other places is not wise. This war is spreading and blocs will be formed - in fact they are forming already; Iran and Russia are increasing their alliance, China and Russia are also increasing their relations. So, blocs are forming. The issue of South Korea and North Korea is flaring too and so is the tension in Taiwan. So, the way the affairs around the world are developing, they are becoming increasingly dangerous. So, to say that one city has been vacated and so the situation is improving and the war might come to a stop and people may come to their senses, is not correct. The apparent circumstances show that this war is going to spread and only Allah knows how many years it will take."

"When we look at the first two World Wars that took place, it was not the case that a World War began from the first day of conflict. Initially some blocs were formed and then they changed whilst the war continued raging. Germany and Russia were in one situation and later that changed in the second world war. So a similar situation can occur again. I have been warning repeatedly and if they do not pay heed and do not turn to God and people do not come to their senses then the situation will worsen. Allah the Almighty has mentioned in the Holy Quran that the prophecies concerning warnings can be averted if people pay heed. If people amend their ways and they turn to God and use their intellect in the right way to serve mankind and follow the commands of Allah the Almighty, then they will save themselves. They will certainly then have a realisation that we were protected because of this reason. The people of Prophet Younus (peace be upon him) were saved because of the fact that they cried and wailed to God and amended their ways."

"So it will be the responsibility of the Ahmadiyya Muslim Community that we increase our efforts in propagating the true peaceful message of Islam. We should tell the people that they were saved from calamity because they sought forgiveness and in doing so they have fulfilled one aspect of their responsibilities, which is to seek forgiveness. But if they wish to truly save themselves in the long run then they should turn to the Imam of the age and accept the Holy Prophet Muhammad (peace and blessings be upon him) and form a living relationship with God Almighty and that will give them the true salvation. Otherwise they will repeatedly find themselves in the same situation and disorder and wars will continue to rage. So, that will be the time to preach the message of Islam. Otherwise this present war seems as though it will spread if they do not mend their ways. Whether it is within a year or a few years, only Allah knows best."

An attendee asked His Holiness how to get Ahmadi Muslims to come together again like they did before the pandemic.

His Holiness highlighted that several major events of the Ahmadiyya Muslim Community have now taken place where a large number of people have come together and so people need to realise that they should begin to come to the mosques again. His Holiness gave example of the Jalsa Salana UK and His Holiness' tour of America where people came together in large numbers whilst also observing appropriate Covid protocols and mentioned that they should serve as examples for the various chapters of the Ahmadiyya Muslim Community around the world to also hold their events and functions.

"It is the responsibility of Majlis Ansarullah to inform their families at home that they should go to the Mosques. It is also the responsibility of Majlis Khuddamul Ahmadiyya and Lajna Imaillah. So, if Ansarullah, who are the elders, tell their families and they go to the Mosques themselves then the situation will improve. It is down to the effort you put in."

A member of Majlis Ansarullah enquired from His Holiness what they can do to help the environment and reduce global warming.

His Holiness mentioned that he has already highlighted to the children's and ladies' auxiliaries of the Ahmadiyya Muslim Community that they should plant more trees and not make short journeys on cars and should develop the habit of walking and cycling more.

"It is the job of governments that they should organise tree plantations and run their industries in a way that it reduces carbon emissions. China is now saying that Europe and America benefitted economically from the previous fifty or sixty years of using fossil fuels and so, China is going to catch up and then take action on carbon emissions. So everyone is after their own interests."

"A selfishness has taken root. Wherever industrial development is taking place, for instance in India, then India is saying that why should they reduce their carbon emissions and so too is China and so too are other countries which are developing. Because the West has developed and reached a better place, they are telling others to reduce their carbon emissions whilst also refusing to face any downsides themselves of reducing carbon emissions. They wish to stay as developed as they are... So, it is all highly politicised."

His Holiness also highlighted that wars are having a negative impact on the environment and contributing to global warming.