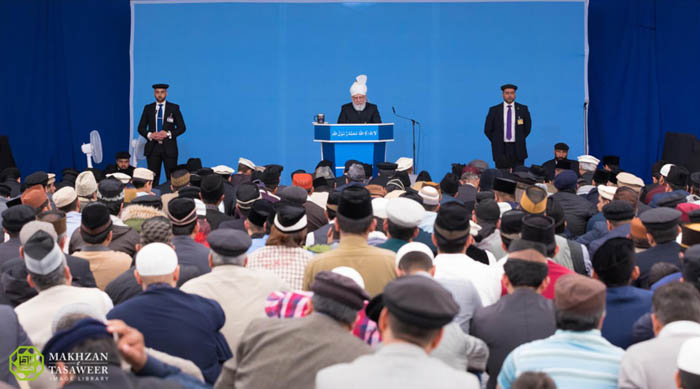 On 21 April 2017, the World Head of the Ahmadiyya Muslim Community, the Fifth Khalifa (Caliph), His Holiness, Hazrat Mirza Masroor Ahmad delivered his weekly Friday Sermon in the German town of Raunheim. 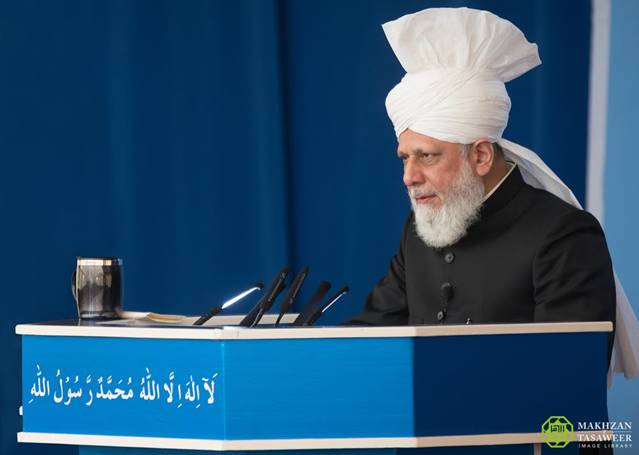 During his sermon, attended by more than 6,000 people, His Holiness spoke of the need for Ahmadi Muslims to spread the true teachings of Islam and to be proud of their faith.

His Holiness said that some Muslim youth were hesitant in speaking openly about Islam as a result of the hateful actions of some extremist Muslims. Rather than shy away from expressing their faith, His Holiness urged them to become even more vocal in spreading Islam's true and peaceful teachings.

"At a time, when some so-called Muslims are carrying out the most heinous and evil acts in the name of Islam, it is even more important for Ahmadi Muslims to portray Islam's peaceful teachings without fear. Indeed, they should inform others that the deteriorating state of Muslims is in fact a great proof of the truthfulness of the Holy Prophet Muhammad (peace be upon him) because he foretold that there would come a time of spiritual darkness amongst the Muslims where Muslim clerics would spread disorder. The Holy Prophet (peace be upon him) also foretold that at such a time of spiritual darkness a Messiah and Mahdi would be sent by God Almighty to revive Islam's true teachings. We, Ahmadi Muslims, are very fortunate to have accepted the awaited Messiah and so we are acting upon the true teachings of Islam."

During his Friday Sermon, His Holiness cited various examples of non-Muslims who had attended Mosque Openings and Mosque Foundation ceremonies during his current tour who openly acknowledged that their fears and apprehensions concerning Islam had all been removed. His Holiness said such examples should encourage Ahmadi Muslims to increase their efforts to propagate Islam's real teachings and to counter the negative and unjust publicity Islam often receives in the media.

"Once a person comes to know of Islam's real teachings they cannot help but be impressed by its virtuous teachings and accept it as a peaceful religion. Therefore we should never feel any inhibition or complex in speaking about Islam."

His Holiness concluded his address by reminding the gathering about the need for self-reflection and to forgo arrogance in favour of humility.

"Do not look at the faults of others, instead you should focus on your own weaknesses in order to reform yourselves. Remember, that no one can claim that they are completely free of any weakness."