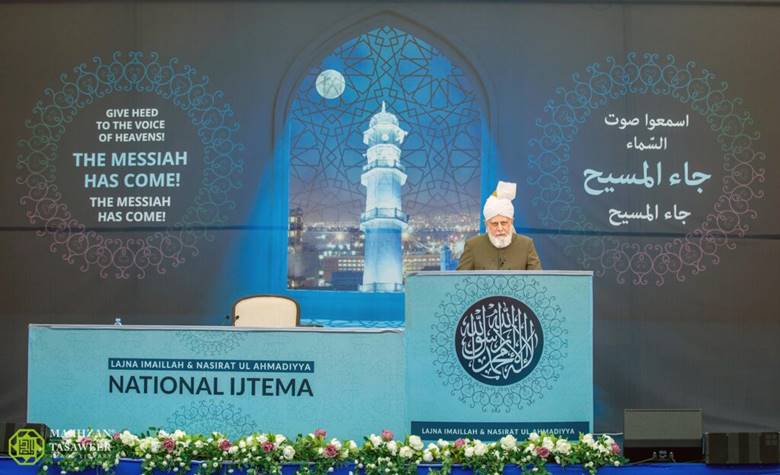 "Even in schools, very small children are being taught inappropriate and immoral things, which they are far too young to comprehend." - Hazrat Mirza Masroor Ahmad

The 3-day event which was held at Old Park Farm in Kingsley was attended by more than 6,800 women and girls.

During his address, His Holiness spoke of the responsibilities that Lajna Imaillah as an auxiliary organisation bears and the harms of following societal trends.

His Holiness reminded the attendees that the second Caliph of the Ahmadiyya Muslim Community gave the name 'Lajna Imaillah' after much deliberation and the term means, 'a community of the servants of Allah the Almighty'.

With such a noble name for the organisation, His Holiness said it naturally brings upon its members heavy responsibilities.

His Holiness quoted chapter 49, verse 15 of the Holy Quran which addresses the desert dwellers of Arabia at the time of the Holy Prophet Muhammad (peace and blessings be upon him) and states:

"Say, 'You have not believed yet', but rather say, 'We have accepted Islam.'"

Explaining this verse in the context of responsibilities that Lajna Imaillah members have, Hazrat Mirza Masroor Ahmad said:

"Here Allah the Almighty commands that whilst those rural people should say they have 'accepted Islam' and become Muslim, they should not claim to have 'believed' or to have gained true faith. This is because the standard of faith required of a sincere believer far exceeds the mere acceptance of Islam. Anyone who recites the Kalima [Islamic declaration of faith] can say they are a Muslim, but not everyone can say they are a believer or have acquired true faith."

"Proclaiming that Allah the Almighty is the One and Omnipotent God, the Holy Prophet (peace and blessings be upon him) is His Messenger, and Islam is a perfect religion, represents only the most basic level of belief. Absolute faith requires a far higher level of belief and understanding and one cannot reach that level, until and unless they act upon all of the commands of Allah the Almighty. So, the first thing that every Ahmadi must remember is that they must strive to become complete in their faith and belief. "

Speaking about some of the specific responsibilities Lajna members have, His Holiness spoke about the fundamental significance of the worship of Allah the Almighty.

"You should all be aware that the worship of Allah is fundamental to true belief and faith. Namaz is the cornerstone of reforming an individual, whilst, at the same time, it serves to unify and strengthen the collective bond amongst Muslims."

His Holiness also outlined the importance of protecting oneself and one's children from the harmful effects of modern-day media.

"Today's society has become morally corrupted and spiritually decayed, as the harmful effects of the mainstream media and social media continue to drive people away from religion and belief in God. Even in schools, very small children are being taught inappropriate and immoral things, which they are far too young to comprehend. As a result, children, from a very young age, are being conditioned by their schools and the wider society into a secular way of thinking and away from religious values and teachings. In such conditions, the onus is very much upon parents to ensure the moral training of their children."

"These days, even children's cartoons or computer games include storylines or characters that are wholly inappropriate and take away children's innocence. The long-term consequences of such exposure are extremely dangerous and can easily take our future generations away from religion and away from moral values. Thus, parents must keep a close eye on what their children are exposed to, and to counter the outside influences, Ahmadi Muslim parents must develop a purely Islamic atmosphere within their homes, where the commands of Allah are acted upon and the best morals are displayed."

Speaking further about how Ahmadi Muslim parents should keep a strong bond with their children, Hazrat Mirza Masroor Ahmad said:

"Talk to your children every day and tell them those things that will bring them closer to Allah the Almighty and His Prophet (peace and blessings be upon him). As I have said many times before, it is essential that Ahmadi Muslim parents develop a genuine friendship and mutual trust with their children from the very beginning. Whilst this is the duty of both parents, it is especially incumbent on Ahmadi Muslim mothers to forge a loving and close bond with their children and to instil religious values within them. You should encourage your children to talk to you freely and openly. Children are naturally curious and it is the duty of a mother to answer their questions."

If children ask questions that mothers do not have the answers to, His Holiness said they should not just ignore them or brush them to the side, rather they should research the answer and explain it to their child.

Explaining how mothers should inculcate an interest in religion within their children, Hazrat Mirza Masroor Ahmad said:

"Strive to develop an interest for religion in your children. Explain to them why religion is important and to be valued above all else. Ensuring your children's moral and spiritual training is a huge task and the foremost challenge for Ahmadis who have children growing up in today's society, and mothers have the main role to play in this effort."

Amongst the qualities His Holiness spoke about that a true believer should adopt is the attribute of humility.

"Another quality and virtue of a believer is humility. It is very easy to say you are humble but sometimes a person's conduct belies such claims. For example, some people who consider themselves humble do not realise that the way they speak to others causes them pain and reflects their arrogance and pride. At all times, we must be cautious and conscious that we never manifest even the slightest degree of pride or consider ourselves superior to others. Where, on the one hand, arrogance causes disorder and restlessness in society, it also plays a very negative role in the moral upbringing of one's children. This is something to seriously ponder and reflect upon."

Speaking about the quality of spending on the poor and needy, Hazrat Mirza Masroor Ahmad said:

"Another virtue required of a believer is that they should have the habit of being regular in Sadqa (charity) and spending in the way of Allah the Almighty. With the Grace of Allah, most of our members are those who generously give Sadqa to help the poor and needy and make great sacrifices to fulfil the needs of the Jamaat through Chanda (financial sacrifice). Now, as the economic state of the world worsens and people's financial condition becomes strained, some people may think that they should focus on their own needs and tighten their giving hand. In such circumstances, we should remember those in greater need than us and help and support them as much as possible."

His Holiness also spoke about the Islamic concept of the veil known as 'purdah'. His Holiness noted that some women express that it is 'difficult' for them to observe purdah in Western society. However, His Holiness said that was a result of a 'needless and misjudged inferiority complex'. His Holiness said he has given examples in previous speeches of how there are countless examples of young, professional, Ahmadi Muslim women who courageously adhere to purdah whilst going about their day jobs.

Referring to such women who are employed and also wear the Hijab, Hazrat Mirza Masroor Ahmad said:

"On those occasions when their employers sought to prevent them from observing Hijab, the Ahmadi women took a stand and said they would not compromise their faith. They would not remove their scarves just to satisfy their employers. They would not forsake their modesty for the sake of their career. They made it clear that they would much rather lose their jobs than be forced to dress in a way that was against their beliefs. In the end, seeing their intelligence and no doubt being impressed by the courage of their convictions and their standards of morality and decency, the employers changed their minds and permitted them to work whilst observing Purdah. Do not, therefore, submit to the pressures of the world! The commands of Allah are timeless, and only if we act upon them can we live fulfilling lives and protect ourselves and our future generations."

Speaking about the moral standards of the West that Ahmadi Muslims must guard against, Hazrat Mirza Masroor Ahmad said:

"In Western countries, there is a growing trend and movement to teach small children in schools or elsewhere, things that are entirely beyond their comprehension and not at all age appropriate. They are trying to sexualise innocent young children by teaching them things they are not ready to process. Throughout history, children have not been exposed to such things at such a young age. So why now is there a need to force very small children into discussions about sex? All it serves to do is to destroy the innocence of youth and is bound to have long-term harmful effects." 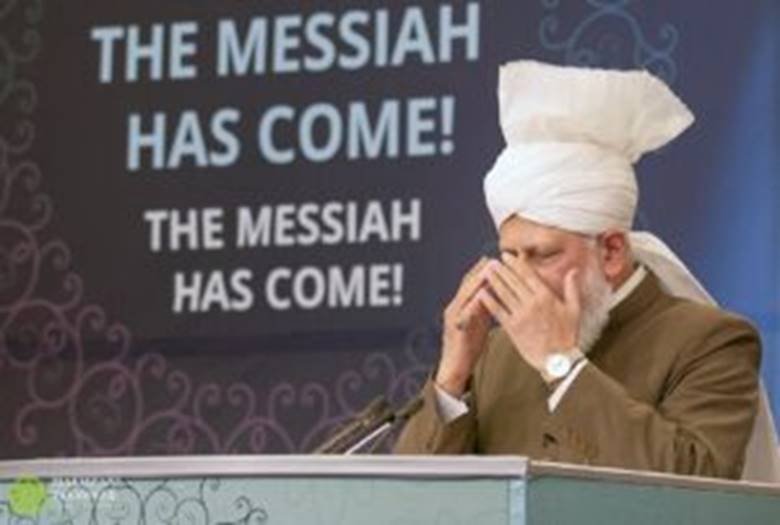 As the address concluded, His Holiness prayed for the attendees and said:

"If our Ahmadi women can fulfil their duties and objectives, then, Insha'Allah, they can and will bring about a great moral and spiritual revolution in their homes, in their cities, in their nations and the entire world. May Allah enable all of you to be the ones who give rise to such a spiritual revolution and may the future generations of the world say that Ahmadi mothers and girls of this era played an outstanding role in saving them and ensuring that they remained on the path of true spiritual salvation. May Allah enable it to be so."