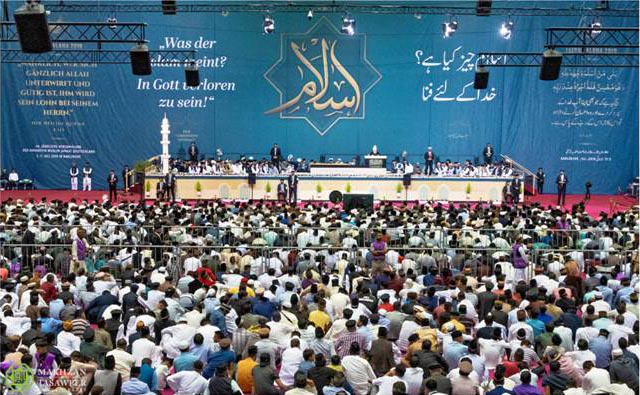 "We must never prioritise worldly pursuits above and beyond our faith." - Hazrat Mirza Masroor Ahmad

Prior to the Sermon, His Holiness raised the Flag of the Ahmadiyya Muslim Community (Liwa-e-Ahmadiyyat) to officially inaugurate the event, whilst the German National Flag was also raised. 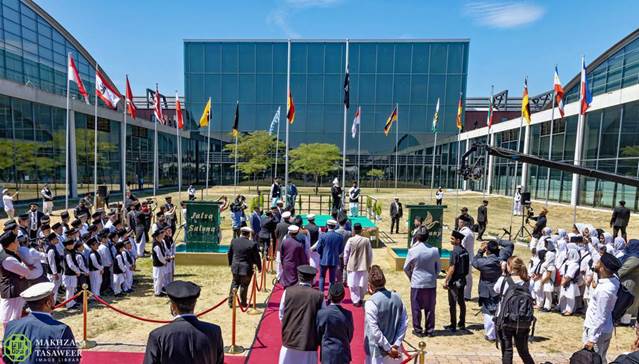 Following the Friday Sermon, His Holiness launched the new German language website of the Review of Religions magazine and answered questions from representatives of the European media during a Press Conference.

Later in the day, His Holiness met with several delegations of guests and converts to Ahmadiyyat from nations including Senegal, Comoros Islands, Mayotte and Lithuania. Further meetings with delegations from other countries will continue throughout the Jalsa Salana Germany.

During the Friday Sermon, His Holiness spoke about high moral and spiritual values an Ahmadi Muslim must try to attain and how the Jalsa Salana offers a perfect opportunity to try to better oneself in following the teachings of Islam. 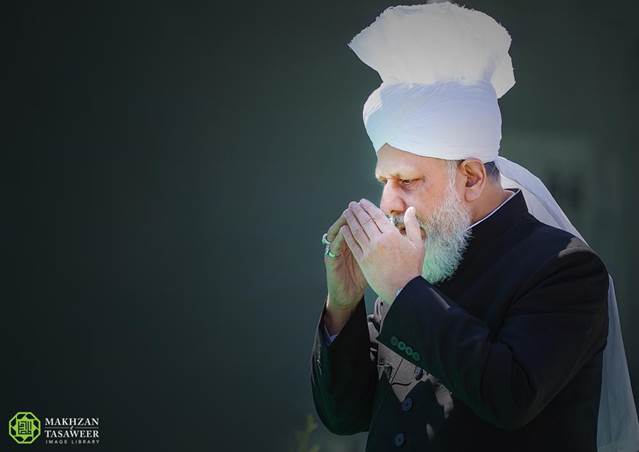 His Holiness said that Ahmadi Muslims eagerly anticipate the arrival of the Jalsa Salana throughout the year, however the anticipation should be with the intention to fulfil the purpose of the Jalsa Salana, which is to improve in one's morality and spirituality. 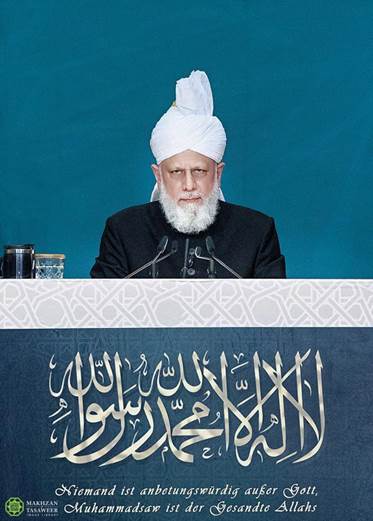 His Holiness said the purpose of the Jalsa was not to showcase a large gathering of people or to impress others by its scale, rather its purpose has been mentioned by the Founder of the Ahmadiyya Muslim Community, Hazrat Mirza Ghulam Ahmad, the Promised Messiah (peace be upon him) as an event to try and bring about a pious reformation within the attendees.

Hazrat Mirza Masroor Ahmad said the Jalsa Salana has come at an opportune time whereby the month of Ramadan has just passed.

"The month of Ramadan ended a short while ago, which was a month of spirituality and reformation during which believers had the opportunity to pray fervently and fast and gain the nearness of God Almighty. Now we are embarking upon another three-day 'camp' of moral reformation during which we must endeavour to increase our religious knowledge and live in an environment where the remembrance of God is emphasised and practiced."

His Holiness outlined some of the requirements from a true believer as outlined by the Promised Messiah (peace be upon him) and urged the Ahmadi Muslims to try to live their lives according to the pristine teachings of Islam.

"It is certainly a great achievement to prioritise one?s love of God Almighty and love for the Holy Prophet Muhammad (peace and blessings be upon him) above the love of this world. This is in fact what makes a person a true believer. After the three days of Jalsa Salana, people will go back to their jobs and pursuits. However true benefit of Jalsa Salana will only be attained if one manages to prioritise their faith above all worldly desires."

Hazrat Mirza Masroor Ahmad highlighted the responsibilities associated with being a part of the Ahmadiyya Muslim Community and quoted the Promised Messiah (peace be upon him) in this regard.

Hazrat Mirza Ghulam Ahmad, the Promised Messiah (peace be upon him) stated:

"In the heavens, you will only be considered a part my community if you truly tread upon the path of righteousness."

In relation to this, Hazrat Mirza Masroor Ahmad stated:

His Holiness emphasised the need for the attendees to set aside any grudges or ill-will they may hold against others and try to inculcate within themselves a spirit of brotherhood and to heal any rifts that may exist.

"Rather than burning in jealousy and malice, foster peace and reconciliation. We must always keep the saying of the Holy Prophet Muhammad (peace and blessings be upon him) that 'A true Muslim is the one from whose hands and tongue other Muslims are safe'at the forefront of our minds. We must analyse ourselves to see if we have reached the standard demanded. Are our actions in accordance with this?"

"Every person that attends the Jalsa Salana is a guest and the duty holders must set aside any hard feelings and take the high moral ground and manifest compassion towards others." 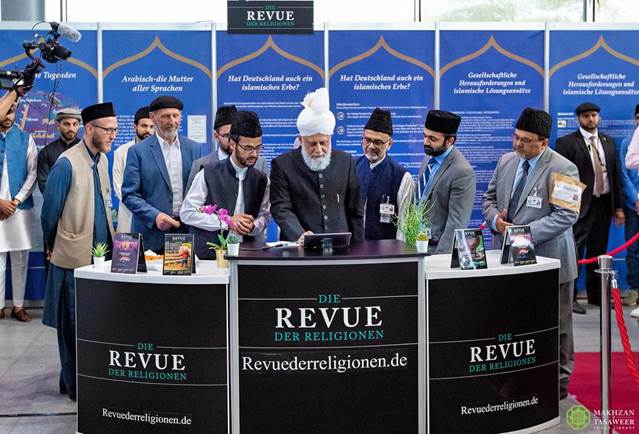 Explaining the standards that must be exhibited by duty holders at the Jalsa Salana, Hazrat Mirza Masroor Ahmad said:

"Duty holders in particular have the responsibility to have a high threshold of patience and tolerance. Thus duty holders must consider themselves to be servants of the guests in all circumstances. On the other side, the guests who are attending the Jalsa Salana should consider the duty holders to be the representatives of the Ahmadiyya Muslim Community. Only then can a true atmosphere of mutual love and peace be established."

Returning to the theme of prioritising one's faith above all worldly matters,

"Allah the Almighty never stops one from taking part in business and worldly pursuits. In fact Allah the Almighty prohibits us from isolating ourselves and becoming entirely cut off from the world. However, we must never prioritise worldly pursuits above and beyond our faith. Faith must always be prioritised. Every Ahmadi Muslim must remember that behind the face of every Ahmadi Muslim, lies the face of the Ahmadiyya Muslim Community and the Promised Messiah (peace be upon him) and the face of Islam."

During the Press Conference that followed the Friday Prayers, His Holiness was asked about the rise of Islamophobia, his message for the world, immigration and women's rights in Islam.

Regarding women's rights, Hazrat Mirza Masroor Ahmad explained that Islam was the religion that first gave basic rights to women, such as the right to divorce and the right to inheritance.

As he concluded his answer, Hazrat Mirza Masroor Ahmad said:

"My philosophy is that if women work outside the shade of men, they flourish."

His Holiness also said that immigration should not be considered a threat to Western values.