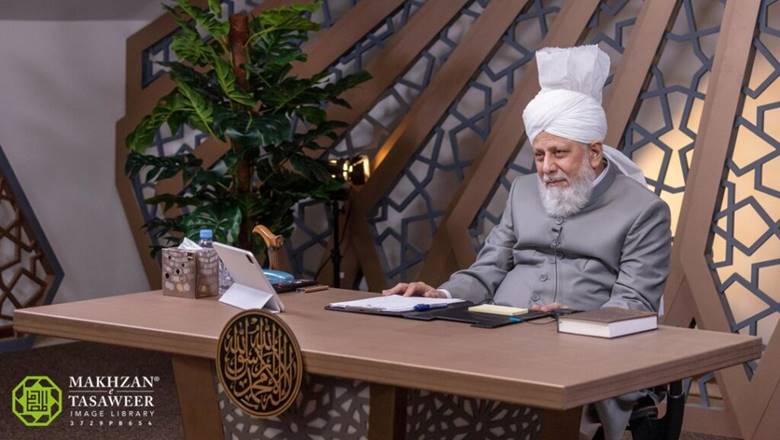 Khuddam from Brisbane, Australia have Honour of Virtual Meeting with World Head of Ahmadiyya Muslim Community

"The position of the Khalifa is that of a spiritual leader. He will never govern any country" - Hazrat Mirza Masroor Ahmad

His Holiness presided the meeting from MTA Studios in Islamabad, Tilford, whilst the Khuddam joined the meeting virtually from the Mubarak Mosque, in Brisbane.

One of the attendees asked His Holiness if the Khalifa of the time will ever take up the responsibility of governing a country if Ahmadi Muslims were ever to form the majority of the population in any country.

"The position of the Khalifa is that of a spiritual leader. He will never govern any country. The Promised Messiah (peace be upon him) has stated, 'What have I to do with [governing of] countries? For my country is most distinct from all others. What am I to do with crowns? For my crown is the attainment of the pleasure of the Beloved.' The task of the Khalifa of the time is to carry out spiritual reformation. What if there is majority of Ahmadi Muslims in one country (and the Khalifa were to have political leadership) and then later, another country also becomes majority Ahmadi Muslim? The second country will then say, 'We cannot disagree with that country because we have taken the pledge of allegiance with the Khalifa.' Then a third country will also become Ahmadi Muslim and then a fourth and so on. Therefore, this political or governmental system will continue to function independently and the Khalifa of the time will guide all in spiritual matters."

"It should be clear that the Khalifa has nothing to do with the running of governments. The Holy Quran has stated that if two Muslim groups or countries fight, then others should reconcile between them and if they do not desist from fighting then deal with them firmly and then when they stop fighting, do not carry out any injustice against any of them and be fair and let them become established on their own feet. This all refers to Muslim countries, which means that multiple governments will be present. When the Holy Quran was revealed, at that time there was only one government, which was that of the Holy Prophet Muhammad (peace and blessings be upon him). After that it remained as a unified government in the time of the Rightly Guided Caliphs. Thereafter, when there was a period of kingship, the stronger government remained united for a long time. After that the smaller governments came about. It was a prophecy that governments would be established in this way and at that time, after the Promised Messiah (peace be upon him), who was the Seal of all the Caliphs, the Khalifa of the time was to carry on the responsibility of spiritually guiding people. If any of them fights - just as there are conflicts between neighbours or brothers - then the Khalifa of the time shall reconcile between them. Therefore, the Khalifa of the time will not be running the government of any country."

An attendee who had converted to the Ahmadiyya Muslim Community mentioned that his parents had not converted and asked how he can educate his parents so that there will be no conflict when he raises his own family as Ahmadi Muslims.

"When you marry an Ahmadi Muslim girl and you have your children from your wife who is an Ahmadi Muslim and you are living in an environment or in a vicinity where your parents also live, then instead of confronting them directly on small petty issues, just tell them that the basic morals are the same between us. [Tell them that] these are the basic morals; we say that we should worship God, we say that we should show good morals towards each other, we should refrain from all the bad things. So, these are the basic things and they will agree with this." 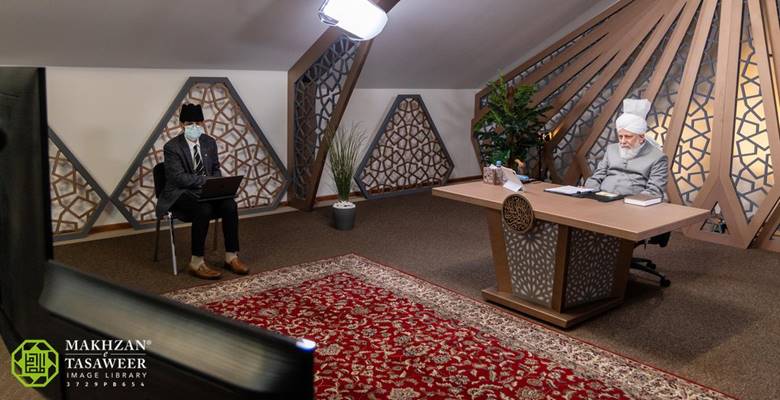 Speaking about having children after marriage and their moral training, Hazrat Mirza Masroor Ahmad said:

"You will have to be a practising Muslim first and your wife shall have to be practising Muslim. This is the basic requirement. In this way you will set your example before your children. Also teach them what is Islam and why we are Muslim. And if they ask you that, 'why our grandparents are not Muslims?' then tell them that, 'Allah the Almighty says, 'There is no compulsion in religion.' So whichever religion they chose, they have adopted that one. But whatever we feel is good, we have chosen that religion and [tell them] why we have chosen this religion, why we like Islam.' So, in this way you can train you children and at the same time tell your parents about the beauties of Islamic teachings. And when they know the beauties of Islamic teachings, then they will always try to listen to what you are saying. When they see there is some significant change in you and you are somehow different to your previous life then they would know that, 'Our son is going on the right path.' Also pray for them. [Just] as the prayer of the parents is accepted for the children, in the same way, the prayer of the children is also accepted for their parents, if they are praying them. So, pray for them that Allah the Almighty also opens their hearts and they accept Islam. But you will have to reform yourself first. You have to be a practising Muslim and then show your examples before your children. At the same time, teach them, and you will have to work hard for that. Otherwise not only your parents, but the environment will also influence your children. They will deviate from the basic teachings of Islam."

Another Khadim asked about what could be done to bridge the generation gap between children and their parents.

"From the very childhood you have to train your children. Tell them what is religion, why you are an Ahmadi Muslim and what is religion. So, if they are attached to the religion and you are able to infuse in them the importance of religion, then they would seek to learn more about religion. And when they are learning about religion, despite the fact that there is a generation gap, they will try to practise their religion and learn more about their religion."

"You see, they (children) are educated. When they ask you some question, [do not say] 'No, don't ask us, it is against the teaching of Islam." No, Islam says they must ask questions, and you have to satisfy them. If you don't have the knowledge with regards to your religious matter, then you can ask your Missionary that, 'Kindly answer the question of my son or daughter or my children.' If it is that the question is related to any worldly thing, [for example] 'how can we reconcile the world with religion,' then you will have to see some scholars, read some books and tell them to read it. In the literature of the Ahmadiyya Muslim Community there are books which can answer your question. So, this is how you can fill your generation gap. But there should be very friendly interaction between you and your children."

"Nowadays it is a good habit of the children that they ask, "why?", and you have to answer the 'why', whether it is with regards to their religious question or any worldly question. For that you will have to increase your own knowledge as well. Don't just put your whole weight on the shoulder of the Community. You will have to bear it yourself."

Another Khadim asked His Holiness about the revelation of the Promised Messiah (peace be upon him) that says, 'I shall show you the flash of this Sign five times.' The questioner said that some people refer to the two World Wars as the first two of the five signs. He asked if the other three signs will also take the shape of world wars.

"The Promised Messiah (peace be upon him) referred to the earthquake as a great sign. Then the two world wars have also occurred and so has the plague which was also a sign. It could be that the third world war is the fifth sign. Or it could be that the sign has already occurred. It could even be in the shape of war and we can assume based on the apparent circumstances that it will be in the shape of a war. It should however be a manifest and obvious sign which has grandeur behind it, like the plague and the two World Wars or some of the earthquakes that also occurred. However, if the earthquakes were limited to certain areas then you may not count them. It could also be that Covid-19 pandemic was also one of the signs. Or, it could be that the world war that is yet to come is one of the signs. So, Allah knows best. From the apparent circumstances it seems that the World War will also be one of the signs."