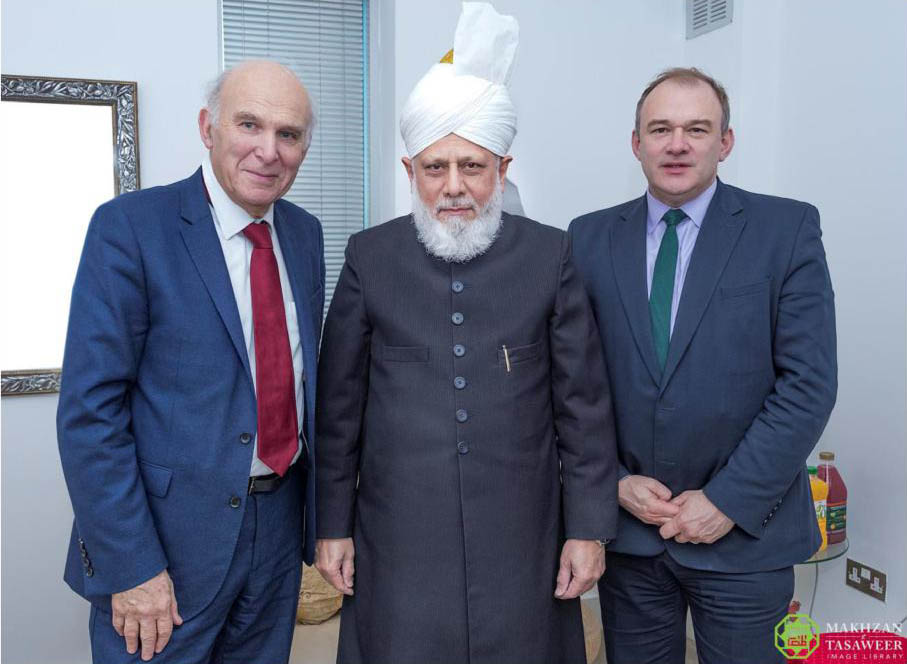 On 5 January 2018, the Leader of the Liberal Democrats Party, Sir Vince Cable MP visited the Baitul Futuh Mosque where he met the World Head of the Ahmadiyya Muslim Community, the Fifth Khalifa (Caliph), His Holiness, Hazrat Mirza Masroor Ahmad. Also present at the meeting was Sir Edward Davey MP.

During the meeting, held after His Holiness had delivered his weekly Friday Sermon, His Holiness expressed his grief and sorrow at the continued suffering of the people of Yemen, as a result of the continued warfare. His Holiness said that great cruelties were being inflicted and millions of people, including young children, were dying of hunger.

"There is a humanitarian crisis taking place in Yemen and so a huge effort to help the innocent people is required. In this respect, Ahmadi Muslims are engaged in efforts to provide food and necessary supplies to the people according to our reach and capabilities. It is my hope that Governments and politicians also endeavour to help end the suffering of those people."

Deeming the situation as 'tragic', His Holiness continued:

"Great cruelties are taking place in Yemen and we should be clear on the fact that cruelty is cruelty no matter who is the perpetrator. Thus, whoever is inflicting such miseries and injustices should be condemned."

During the meeting, His Holiness condemned the world's arms trade, which he said was fuelling wars around the world.

Upon being asked by Sir Vince Cable if he had any message or theme that he would like politicians to focus upon, Hazrat Mirza Masroor Ahmad said:

"My message is always the same - that we must all work for the common good and peace through love, compassion and justice. This is the great challenge of our time and we cannot give up."

Also discussed during the meeting were the current state of British and American politics, as well as the continued ramifications of Brexit.

Following the conclusion of their audience with His Holiness, Sir Vince Cable and Sir Edward Davey were given a tour of the Baitul Futuh Mosque complex by Rafiq Ahmad Hayat, National President of the Ahmadiyya Muslim Community UK.