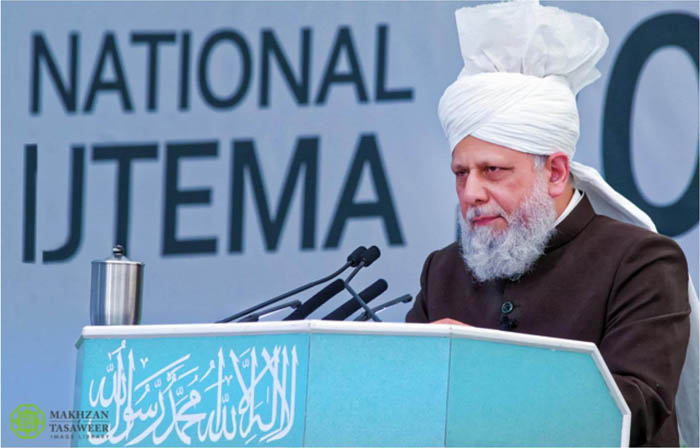 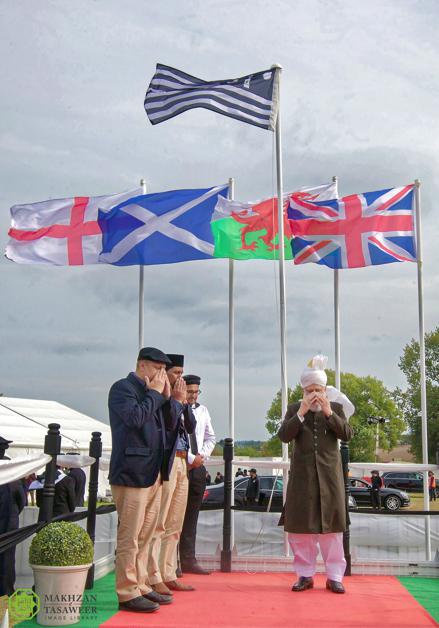 The objectives of the Ijtema, held for the first time at the Old Park Farm, Kingsley, were to learn and practice the true peaceful teachings of Islam and to promote a spirit of peace, unity and love for one's country of residence. This year more than 5,000 Muslim youths attended the event. 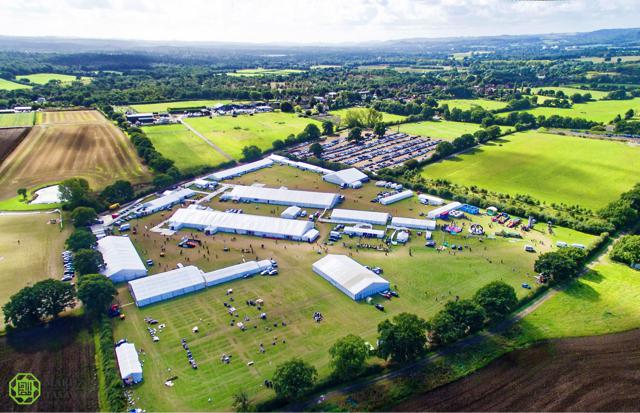 During the final session, His Holiness led the Muslim youth in a pledge in which they reaffirmed both their loyalty to their nation and to their faith.

Speaking about this pledge during his concluding address, Hazrat Mirza Masroor Ahmad said:

"This covenant that you have made is a solemn undertaking and so these words that you repeat time and time again should not be hollow but should have meaning and should be kept at the forefront of your mind at all times. With your conduct you should practically manifest this pledge."

"It is incumbent upon all of us to study the Holy Quran, as it is our pathway to success and salvation. It is that spiritual light that has shown us the true meaning of prioritising our faith over all worldly affairs. It is our means of learning and our means of living."

Thereafter, Hazrat Mirza Masroor Ahmad commented upon some of the issues affecting today's youth in light of the teachings of the Holy Quran.

His Holiness emphasised the Islamic injunction of offering the five daily prayers in congregation with humility and sincerity.

The Caliph spoke on the importance of avoiding idle talk and bad company.

"When you join together it should be to motivate one another towards righteousness and goodness, rather than to lead one another astray. Even the young Khuddam and older Atfal should keep this in mind and keep good friends and good company at all times." 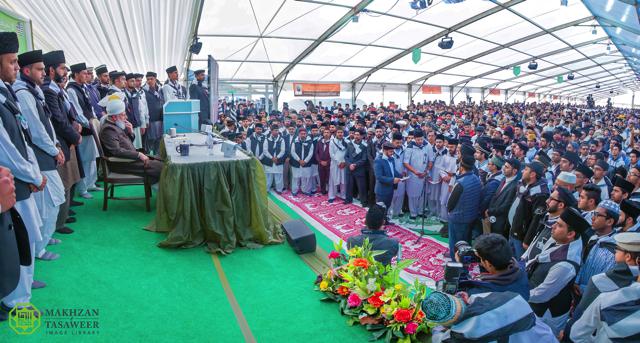 His Holiness spoke in detail on the importance of chastity as mentioned in chapter 23, verse 6 of the Holy Quran which stipulates that a sign of a true believer is that he or she are they "who guard their chastity."

"To guard one's chastity does not only mean that a person should avoid sexual relations outside of marriage, rather the Promised Messiah (peace be upon him) has taught us that it means that a believer should always keep his eyes and ears pure from anything that is indecent or immoral."

"In the Holy Quran, even before Allah has instructed women to observe Purdah, He has instructed believing men to lower their gazes and to keep their hearts and minds pure."

Elaborating on the wisdom behind the Quranic teaching of 'lowering one's gaze',

"By telling men to lower their gaze, Islam actually teaches self---control because normally it is through sight that a man's emotions and desires are stirred... Remember, that modesty is an essential character trait of an Ahmadi Muslim youth and so you must avoid all things that violate the Islamic injunction of chastity." 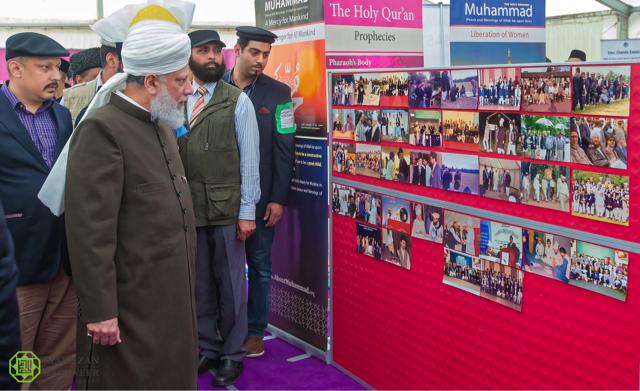 His Holiness also spoke about alcohol and gambling having "far---reaching and negative consequences" and said that both of these vices were a means oftaking a person away from God Almighty.

In terms of alcohol, His Holiness said that the Quran clearly stated that its negative effects greatly outweighed any limited benefits it might have.

He also mentioned the example of the obedience of the companions of the Holy Prophet Muhammad (peace be upon him) when they learned that Islam had forbidden the drinking of alcohol. Without pause or hesitation those companions immediately shattered the barrels and vessels that contained their liquor.

"Gambling it is prohibited because it is a means of recklessly wasting a person's fairly earned and honest income or wealth... Rather, than seeking dishonest 'easy---money' through gambling, you should seek to earn a living in a fair and honest fashion. Remember, that a true Khadim is he who works hard, with honesty and integrity at all times." 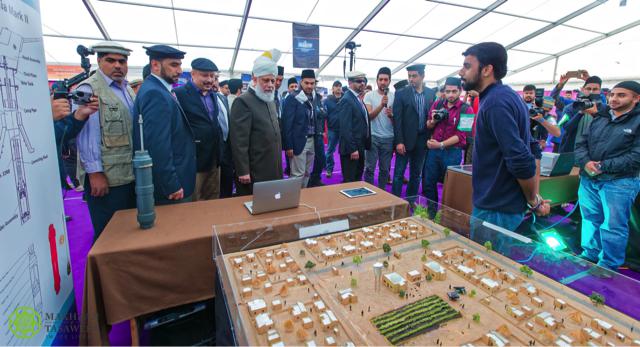 His Holiness also spoke on the Quranic injunction of adopting humility and avoiding arrogance as distinguishing features of true believers.

His Holiness said that office bearers within the Ahmadiyya Muslim Community must particularly focus on adopting this virtue.

"One point I wish to emphasise is that every office bearer, no matter their age or rank, must inculcate a spirit of true humility within themselves. Thus, whether you are a local Qaid, a Mohtamim, the national Sadr or an office bearer of any other rank or position you must remain humble at all times.In chapter 25, verse 64 of the Holy Quran, Allah the Almighty has said that a distinguishing feature of His true servants is that they walk on the earth with humility and leave behind not a single trace of arrogance or pride." 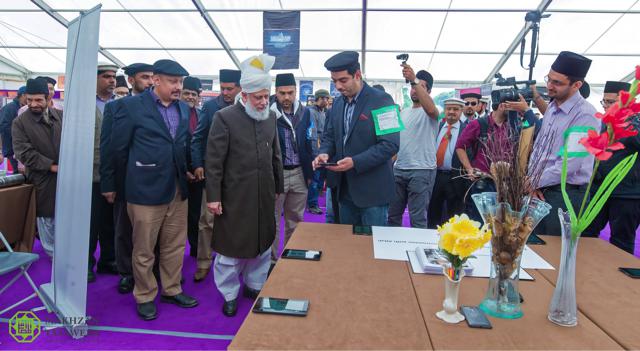 "Whilst every Ahmadi has a duty to be humble, courteous and gentle, of course the office bearers have a particular responsibility in this regard. The Khuddam office bearers should be of a standard that even if they are provoked, and even if others seek argument with them, they should respond only by offering peace and security, through the greeting of 'salam' [peace] before peacefully removing themselves from that environment." 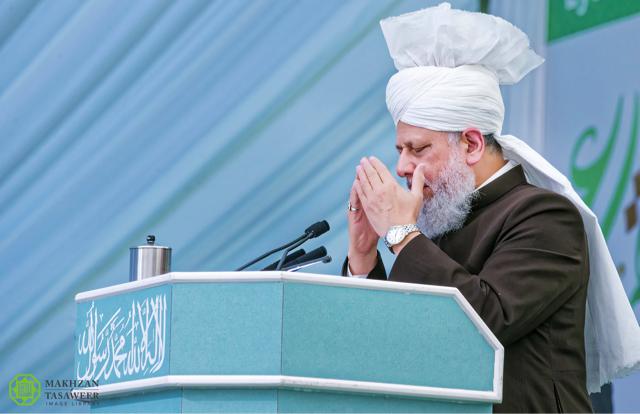 "Always keep in mind the Quranic principle, given in chapter 2, verse 149, in which Allah the Almighty has said that every person has goals and ambitions and that the target for believers should be to excel in virtue and that they should vie with one another in good works. Thus, all Khuddam and Atfal should remember that to be classed as a true believer they must always have the ambition to excel in all forms of goodness and continually seek to better themselves spiritually and morally."

Earlier, a report was presented by Mirza Waqas Ahmad, the National President of the Ahmadiyya Muslim Youth Association during which he informed of the various activities of the 3---day event.

During the Ijtema, Ahmadi Muslim youths from over 100 local communities from across the United Kingdom (Qiadats) competed in various academic and sports competitions.

The Muslim youths were also able to visit the 'The Hub' where they participated in a number of exhibitions and had the opportunity to ask questions in a confidential environment about religion or social issues.