His Holiness presided the meeting from MTA Studios in Islamabad, Tilford, whilst the Khuddam joined the meeting virtually from the Mahmood Mosque in Adelaide. 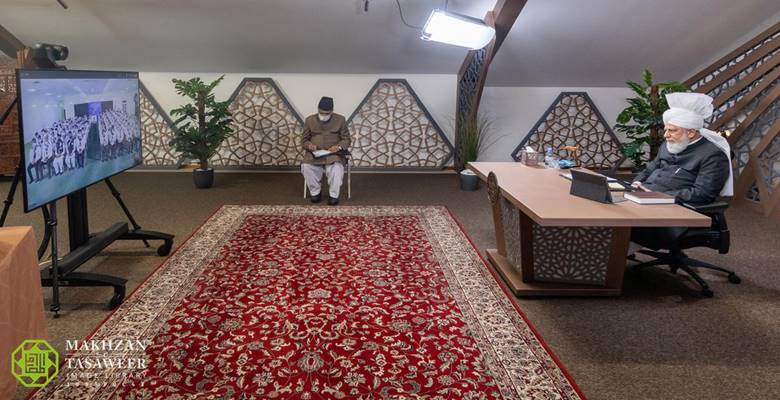 His Holiness mentioned that the root cause of people moving away from religion is materialism, wherein people are forgetting or failing to recognise the purpose of their life. Thus, they are failing to fulfil their obligations to God Almighty and to His creation. His Holiness said efforts to guide members of the community towards their religious duties must start within one's home from childhood.

"If we realise the purpose of our life, then we shall take more interest in religious obligations. We should ensure the proper moral upbringing of our children from childhood. Before entering the age of Atfal-ul-Ahmadiyya, parents should properly train and teach them and when they attain the age of seven, then Atfal-ul-Ahmadiyya organisation should also teach them what are their duties, what are their obligations; that they should pray 5 times [a day] and they should bow before Allah Almighty and always be thankful to Allah the Almighty that He has provided us so many things. Once they realise this thing then when they grow up, when they enter the age of Khuddamul Ahmadiyya, they would realise their duties."

"So the main thing is that, make them (Ahmadi Muslim children & youth) realise what their obligations are, what is the purpose of their life, which is not just to gain and attain the worldly things. So it is a continuous process. Carry on encouraging morality - it is a continuous process. There is no compulsion in religion - they should themselves come to realise what are their duties. So, from the very childhood to all the stages they pass through, we have to take care of our Atfal, Khuddam and youngsters. That is the duty of the office bearers and the trainers. Never give up."

Another Khadim asked His Holiness what role a father should play in the upbringing of his daughters. 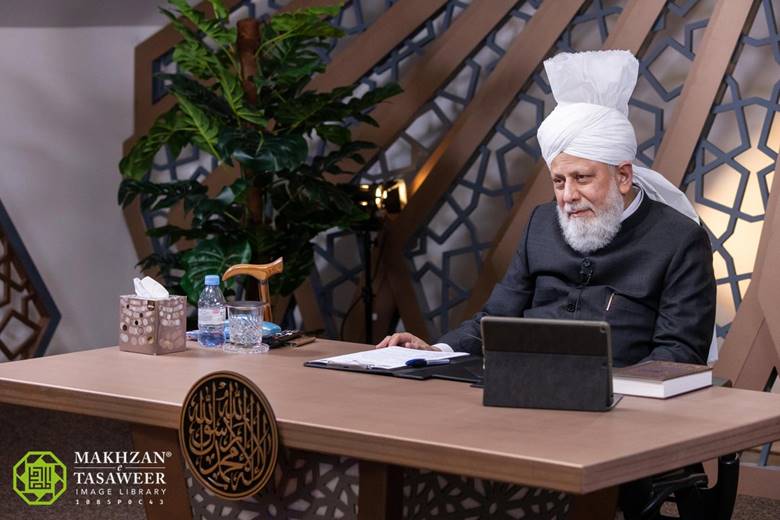 One of the questions also related to how Waqf-e-Nau children whose parents made a pledge to dedicate their children for the service of the faith can be encouraged to understand their responsibilities.

His Holiness mentioned that the same principles that generally apply to raising pious children also apply for Waqf-e-Nau children whereby from a young age their moral upbringing should be catered for and the parents should set their own examples in fulfilling their religious obligations in the best way.

His Holiness also mentioned that it was not only up to the parents to dedicate their children, rather the children at the age of 15 and then later after completing their further education, they must decide for themselves whether they wish to dedicate their lives for the service of Islam.

Reminding parents of their obligations in carrying out the moral training of the children, Hazrat Mirza Masroor Ahmad said:

"Moral training of the children is the obligation of the parents. It should not be that the parents, after having their child and dedicating the child as part of the Waqf-e-Nau scheme, should say to the Ahmadiyya Muslim Community that it should take care of their moral upbringing... As long as the child is in the care of the parents, they must look after the child. If you greatly love someone and you wish to give them a gift, you would buy a lovely gift and wrap it beautifully and make it presentable. This is with regards to a gift you would be presenting to a human being. The gift a religious person presents to Allah the Almighty should be most beautiful. The gift of Waqf-e-Nau that you present to Allah the Almighty should not be such that it is unkempt. It should be beautiful and wrapped well and then presented to Allah the Almighty. If the parents develop this approach, then the mind-set of children will also be correct."

A question also related to why God Almighty has created Hell when He is even kinder than a person's own mother.

"Despite the fact that Allah the Almighty is so Gracious and Merciful and that He is kinder towards His creation than the kindness a mother shows towards her children, some people are so evil that they still bring upon themselves the wrath of Allah the Almighty. So, it is the fault of the people, not God... Allah the Almighty is Gracious and Merciful, but He punishes too and is the Master. If everyone were to know that Allah will not reprimand anyone no matter what they do, then people will become wrongdoers and you will not even worship Allah the Almighty. Everyone will become the same and there would remain no distinction between the good and the bad. So this is why there is the concept of punishment. Secondly, despite the fact that Allah the Almighty says He will punish the wrongdoers, He still forgives people. He forgave someone who killed a hundred people just because he was remorseful and wanted to rectify his ways and made efforts towards that."

His Holiness said that if there was just kindness and no concept of punishment, people would go astray and narrated the story of a mother who would not reprimand her son in his childhood whenever he stole something or became involved in some violence. She would defend him from people. He became further indulged in crimes as time went on and his mother always defended him and showed 'kindness'. Eventually he became a hardened criminal and was eventually caught by the authorities and handed a death sentence. As a last wish, he requested that he should be allowed to meet his mother. When his mother met him, he asked her to stick her tongue out. When she did so, he bit her tongue severely and cut it. When people asked why he did such an evil act just before his execution, he explained that had his mother's tongue reprimanded him in his childhood and not shown unrestrained love and kindness, he would have mended his ways and not be in his present poorly state.

"Allah the Almighty has created a law that anyone who acts wrongly receives punishment. However, despite this He is Merciful and so He forgives people too and it is a result of His mercy that many people who commit wrongful acts are forgiven despite their evil actions. It is also the result of Allah's Mercy that after serving one's time in punishment, a time will come when Hell would be made completely empty and everyone will enter heaven. So, this is His mercy. What we should ponder over is the fact that despite the fact that Allah the Almighty is so merciful, we humans are engaged in such wrongdoing that some continue to be hell-bound!"