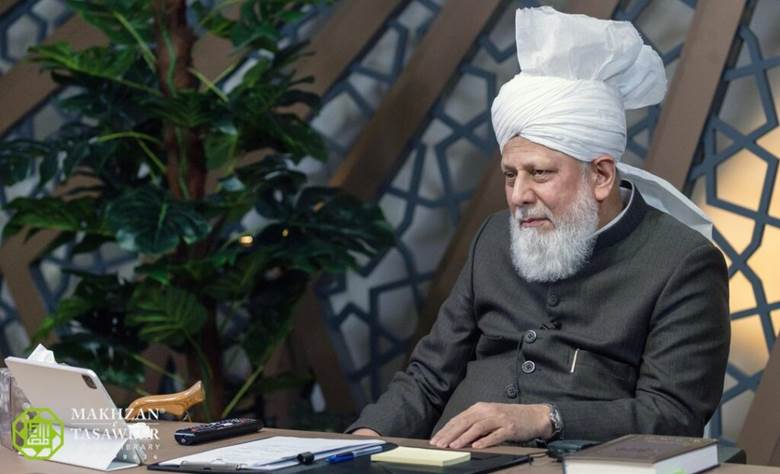 His Holiness presided the meeting from MTA Studios in Islamabad, Tilford, whilst the Khuddam joined the meeting virtually from the Baitul Hameed Mosque in Chino, California.

Following a formal session starting with recitation of the Holy Quran, members of Majlis Khuddamul Ahmadiyya had the opportunity to ask His Holiness a series of questions regarding their faith and contemporary issues. 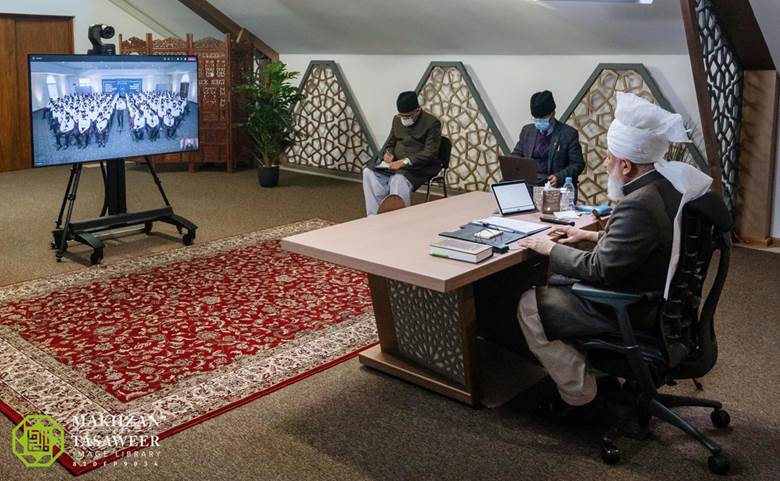 One Khadim asked His Holiness how Khuddam can navigate the clash of cultures of the East from where their parents are from and the West, where they live, all the while remaining true to their faith.

"Islam is a universal religion and if Islam claims that it is a universal religion, then there should not be any question of culture there. People of different cultures will join Islam. If you convert the whole of United States, or majority of Americans into the Ahmadiyya Muslim Community then will they adopt your Asian culture? No. They will only follow the teachings of Islam. And the teachings of Islam are that you should discharge your rights you owe to your Creator, Allah the Almighty. Worship Him as has been prescribed in the Holy Quran and as was practised by the Holy Prophet (peace and blessings be upon him). It is to follow the commandments and injunctions of the Holy Quran."

"There are quite a number of Asian traditions which are contradictory to the teachings of Islam. That does not mean that Islam teaches those things... If you are offering five daily prayers and if you are morally good, if you are obeying the commandments of the Holy Quran there are 700 or more commandments given in the Holy Quran - if you are following those, it is enough. It is not necessary that you must change your culture. Otherwise, you cannot spread the message of Islam, you cannot do Tabligh... so always see what are the true teaching of Islam." 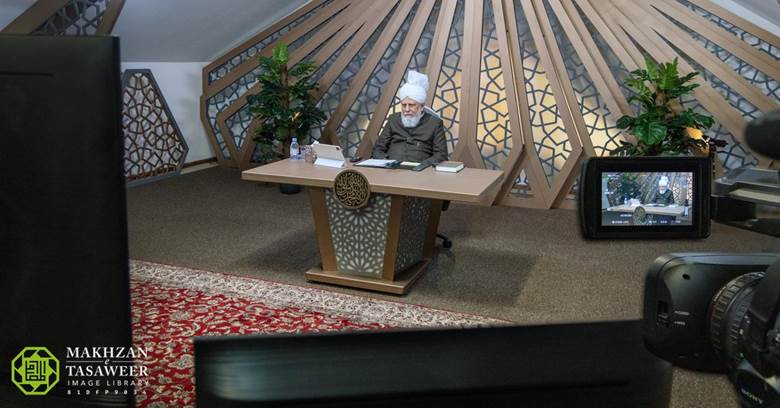 Another Khadim asked His Holiness how he can convince his friends who don't believe in religion about the importance of religion in one's life.

"If you are a practising Ahmadi Muslim and your friends observe something extra [special] in you then they will take notice. If always your morals are good and you behave well towards each person and you are working hard - your actions are something different from that of other students then they will ask you why it is so? Then you can tell them, 'It is because I am an Ahmadi Muslim and we believe in religion. We believe that whenever we do some good things Allah the Almighty will reward us either here or in Hereafter. And then, because we believe in the life after death, this is why, just to please Allah the Almighty and to get the reward in the life after death, we do good things. And we do good things to create peace and harmony and love in the society. We discharge the duties towards Allah the Almighty to please Him.'"

"When you talk to them in this way, then those who are interested, they will ask you more about religion. Those who are not interested, they will just leave you and it is even quite possible they laugh at you. But never mind [them]. Don't have any inferiority complex that they are mocking you. You yourself have to create an atmosphere around you that people themselves ask you what is religion?"

Another Khadim asked a similar question of how they can deal with any form of negativity within their school and daily life.

Again emphasising the importance of living a life that becomes an example to others, Hazrat Mirza Masroor Ahmad said:

"You have to make good friends. If you are a good-natured person and you follow the commandments given to us by Allah the Almighty then the first commandment is to bow before Him, to pray to Allah the Almighty. When the time of prayer comes during the school time, try to offer your prayer. Ask your teacher that either during the break time, or if it is not the break time - "Now it is my prayer time. If you give me a few minutes, I may offer my prayer." So, by seeing this, your fellow students would know that you are a person of different nature."

"If your morals are good, you always behave well, your language is always good, [you are] not doing any immoral things, not even thinking ill of others and you never try to harm anybody, do not fight or quarrel, you are always busy with your school studies or whatever extracurricular activities are given to you by the school, then they would know that these students are different. And those students who are of good nature, they themselves will come to you and try to make you their friend. So, this is the way... And try to increase your religious knowledge as well because sometimes when they will ask you, they will argue with you. They will ask so many questions, and then when they ask some questions then you should be able to answer them with regards to your religion."

One of the Khuddam mentioned that some Ahmadi Muslims on social media seem to be lacking an understanding of the true blessings of obedience to Khilafat and asked for His Holiness' advice about this. 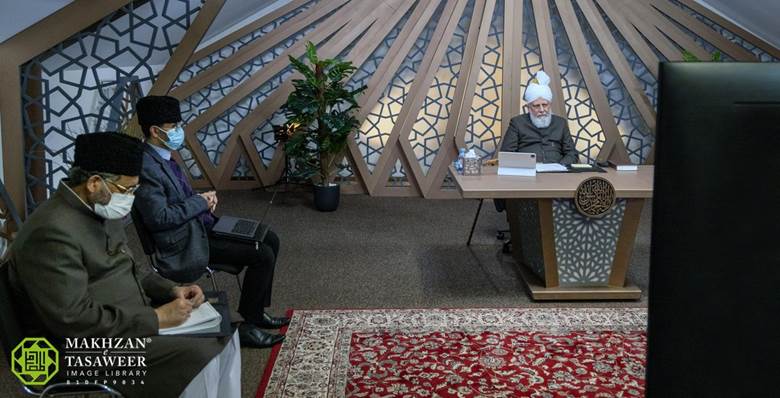 Speaking about his observation of such people, Hazrat Mirza Masroor Ahmad said:

"[Such people] are indifferent about religion. If you do some detailed research, you will see that most of them do not offer the five daily prayers even, not even Friday prayers; they do not discharge their duties to Allah the Almighty. So those who are not discharging their duties to Allah the Almighty, how can they be obedient to Khilafat? There are some among them even who offer their prayers but their understanding is not good with regards to their religion and obedience."

His Holiness mentioned that Ahmadi Muslims pledge that they will obey the Khalifa of the time in all "Ma'ruf" (good) decisions. Explaining the definition of ma'ruf, His Holiness said it is any decision that is in accordance to the teachings of the Holy Quran and the practice of the Holy Prophet Muhammad (peace and blessings be upon him).

"Hazrat Abu Bakr (ra) said in his first sermon that, 'Whenever you see that I am deviating from the Quranic injunctions and the sunnah, then guide me and don't obey me, but apart from that, you don't have the right [to disobey].' So that means, the Khalifa of the time always guides you according to the commandments given in the Holy Quran and the Sunnah. And once he gives the directives or guidance to you (to an Ahmadi Muslim) according to the Quran and the Sunnah then you don't have any excuse to say 'we disobey'. Either you prove that the guidance [of the Khalifa] is against the teaching of the Holy Quran and the practice of the Holy Prophet (peace and blessings be upon him) - that is sunnah - or, obey it. If you say it is not in the Holy Quran and has never been practiced by the Holy Prophet (peace and blessings be upon him) then you will have to give the proof of it and for that, you will write to the Khalifa of the time, instead of just talking and giving loose comments on social media. So, this is the right way."

His Holiness reminded that this very point was highlighted by His Holiness at the very outset of his Khilafat.

"I remember in my first or second sermon [after becoming the Khalifa], I said that whenever you see something wrong in me, tell me and try to correct me. If I think whatever I said was right, then I will give you the proof that I was right. If you are right, then I will correct myself. But you don't have the right to talk here and there. That was my first or second sermon after Khilafat. So even I have said this thing."

"Any decision which is against the teaching of the Holy Quran and the Sunnah is not ma'ruf and you have the right to disobey it. But the decision which is according to the Quran and sunnah, you (Ahmadi Muslims) have to obey it. But if you say that, 'This thing is not good and this is not right' then write to the Khalifa of the time. Ask him 'Why you are giving this decision? Why are you asking us to obey this order or guidance, whereas it is wrong; it is against the teaching of Quran and Sunnah.' Then, Khalifa of the time will either prove that his guidance was right or he will admit that, 'Okay, you are right.' Then he will take the decision back. But you have no right to spread and mislead the people on social media."

One Khadim also mentioned that some children and youth become detached from the Ahmadiyya Muslim Community because their parents do not bring them to the Mosque. He asked His Holiness' advice on engaging such youth.

At the same time, His Holiness reminded of the need for Majlis Khuddamul Ahmadiyya and Atfal-ul-Ahmadiyya to engage the youth directly and said:

"At the same time, Majlis Khuddamul Ahmadiyya and Atfal-ul-Ahmadiyya should make a plan that they should have personal attachment or friendship. Make a personal friendship with those Atfal and Khuddam. Do not only ask them to come to the mosque or come to some of your meetings and Ijtemas. If you have any playground and you are gathering there to play football or any other game, then ask them to join you. So, once they start coming to you, they will become attached to you to some extent and with the passage of time they will also improve their relationship with the Ahmadiyya Muslim Community and with you. So, your Khuddamul Ahmadiyya office bearers and Atfal-ul-Ahmadiyya should also form a team so that those people who are not very much attached to the Ahmadiyya Muslim Community, they should try to make them friends. Make personal contacts with them and this way they will come closer to you. But before that, a consolidated effort should be made by the whole structure of the Ahmadiyya Muslim Community, by the mainstream Community and auxiliary organisations to remove the grievances and doubts of their parents and [effort should be made by] Lajna as well."