His Holiness presided the meeting from MTA Studios in Islamabad, Tilford, whilst 106 Khuddam aged 15-25 joined the meeting virtually from the Baitul Ikram Mosque in Dallas.

After the formal session which began with a recitation of the first twelve verses of chapter 23 of the Holy Quran, His Holiness noted the importance of those verses. 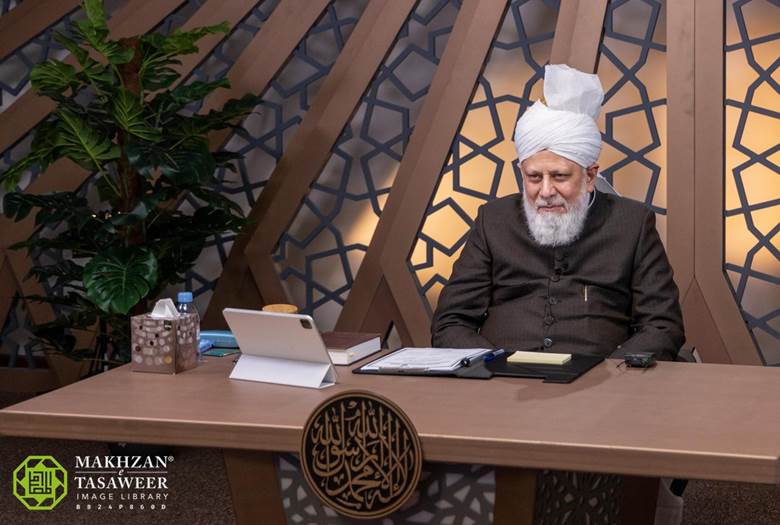 During the meeting, members of Majlis Khuddamul Ahmadiyya had the opportunity to ask His Holiness a series of questions regarding their faith and contemporary issues.

The Khadim asked His Holiness how Ahmadi Muslims can fulfil their duties towards this progress in the coming years.

Referring to the coming years and the duties of Ahmadi Muslims, Hazrat Mirza Masroor Ahmad said:

"Allah the Almighty has promised to the Promised Messiah (peace be upon him) that his Community will spread all across the world. And so the Khuddam, and even every person who claims himself to be an Ahmadi Muslim and a follower of the Promised Messiah (peace be upon him), should work hard so that when the time comes - if we are alive at that time - Allah the Almighty gives us the opportunity to guide those who wish to be guided. For that, we have to learn more about religion... If we ourselves do not know what has been written in the Holy Quran and what was the Sunnah of the Holy Prophet (peace and blessing be upon him) and what Allah the Almighty wants from us, then how can we guide others?"

His Holiness also mentioned that the circumstances of the world are rapidly changing and such changes may draw greater attention of people towards Islam and this will increase the responsibilities of Ahmadi Muslims.

Speaking of how people have begun to recognise the dangers His Holiness had been warning of for several years, Hazrat Mirza Masroor Ahmad said:

"The world is changing. Some years ago, politicians, the representatives of think tanks and analysts used to say that 'There is no chance of any world war', and I would always say that, 'No, there is a fear of world war, you have to be very much careful.' And they were all refusing, refuting, denying it. But now you can see the clouds of war are hanging over us. So, [whether] this world war erupts or not, now people have started realising that this world is not a safe place. Anything can happen at any moment. And I think, ultimately, people will start wondering that why these things are happening? So, if we are discharging our duty for the spreading of the message of Islam and the Ahmadiyya Muslim Community to the people, then time will come when people will realise that, 'Yes, we should follow the commandments and injunctions which have been given to us by Allah the Almighty." 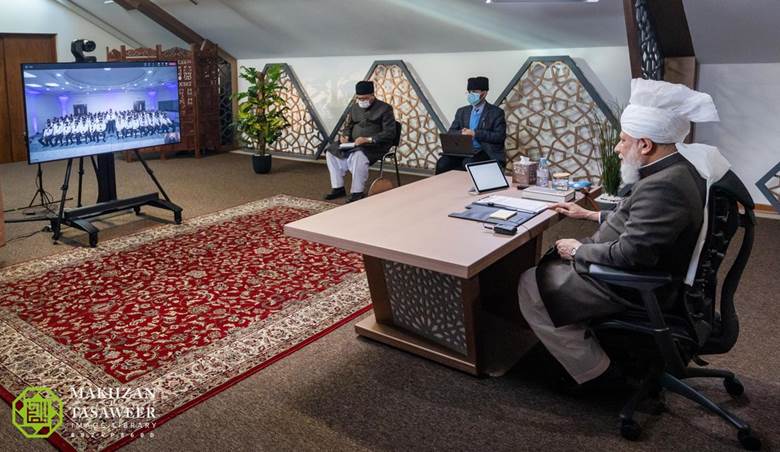 "All the prophets have asked their people to bow before Allah the Almighty, before God, and to be morally good... Behave nicely and kindly towards your fellow beings. But at the same time, you may say [to such people that turn towards religion] that 'Your religions were for that time when their prophets claimed themselves to be the prophet. But now, the Final of the Prophets is the Holy Prophet of Islam (peace and blessings be upon him) and the Quranic teachings are universal. And now, if you want to save yourself, if you want to attain the nearness of Allah the Almighty, then accept Islam and follow its teachings.' Then, I hope - and it is the promise of Allah the Almighty also - that they will pay heed to your words. And when they start listening to you, then that will be your duty to guide them on the right path. They will ask you, 'How can we pray to Allah the Almighty? How can we practise the true teachings of Quran and Islam?' We should have the translation of the Holy Quran in their language ready and this is what we have been doing. So, we have to spread this message and we have to reform ourselves before that time. If we do it, then that means we are preparing ourselves for that time."

One of the attendees asked His Holiness how Ahmadi Muslim youth should balance their religious values while also maintaining a close and healthy relationship with their peers in a society where many vices such as alcohol consumption are common and not considered as 'vices'.

"There are quite a number of non-Muslim students who are of a good nature. So, if they are good and concentrate on their studies then you can become friends with them and you can discuss your studies with them. But, if they say 'Let's go to a club, or have a (alcoholic) drink,' then you should say, 'No. Being a Muslim, I don't want it.'... But as far as your studies are concerned, you can make them your friends."

His Holiness said that Ahmadi Muslims should be strong-willed and their character should be such that it influences others in a positive way.

"You should be so powerful with regard to your character, that they [your friends] should not influence you. Rather, it should be other way round. You should influence them, so that by seeing you they leave their bad habits, they stop drinking! You tell them, 'These are the drawbacks of drinking... This is why our religion says you should not drink.' And, there are some other moral evils you can warn them about. So, this is your duty that being a true Muslim, an Ahmadi Muslim student, you should guide others that they should try to refrain from such things. Instead of you getting under influence of those people, you should rather influence them in a positive way so that they change themselves. You have been created to reform the world, not to indulge yourself in the worldly things. So, it needs some determination. Determination, plus you must pray to Allah the Almighty that He helps you, so that you are saved from all the evils of society."

His Holiness went on to highlight how the Holy Quran has beautifully given the most appropriate guidance on this.

"In the Holy Quran, Allah the Almighty says that in your company you will see different types of people, of different nature and different habits; when they are doing something wrong, just say 'Salam' and leave that company. When they discuss something else, they are doing good things then come and join them. This is the directive given in the Holy Qur'an, that say 'OK, peace. Now you are involved in something wrong, so Salam - peace be on you. I still pray that [may] Allah the Almighty save you from this, and I am going. When you will come to normal condition I will come back.' So always remember this commandment of Allah the Almighty."

Another Khadim asked His Holiness for advice on overcoming bad habits that are difficult to let go.

His Holiness asked him his age and the Khadim mentioned that he is 19 years of age.

"So, at this age you should also try to give some time to increase your religious knowledge and make it a point then you will never miss any prayer. Pray to Allah the Almighty, when you are in Sajda [prostration] position, that Allah the Almighty saves you from all the harmful things of the society. So, it is only Allah Who can help us. Otherwise, the society we are living in is such, that if we are even a little relaxed, it can ruin us, ruin our religion, our life, and we shall be nowhere. So, we have to be very careful and vigilant. To save yourself from Satan is very much difficult and without Allah's help, without prayer, without involving yourself in learning more about the Quranic commandments or other religious literature, you cannot save yourself. So, you should try to spare some time to give to your religious studies, and that will also increase you in your faith."

Another Khadim also asked how His Holiness feels when he receives the letters of Ahmadi Muslims.

"If I receive your letter just once in a year, even then I pray for you. I pray that 'Allah the Almighty bless this person who has written me this letter'. Some people who have been writing to me regularly, at least once a month, then I feel that I have some personal contact with them. So, obviously, it is a human nature - I am also a human being - that there are some different sentiments for that person. Anyway, no matter whether you are writing once in a year or every month, I pray for everybody who writes to me - even for those who do not write to me at all. But, those whom I know very well, you see, then you have some personal connection with them and personal sentiments and emotions for them. So, as you receive the letter of your friend or your brother or your loved one, the same way I feel."