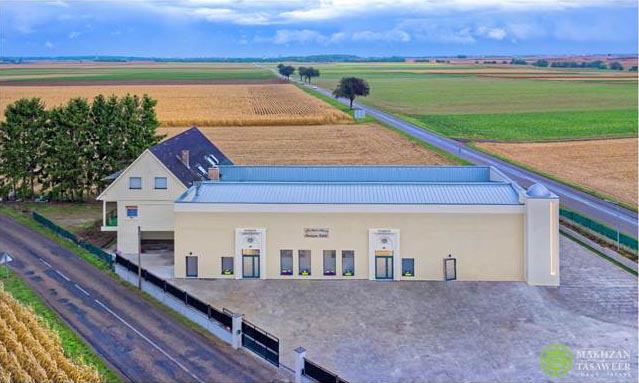 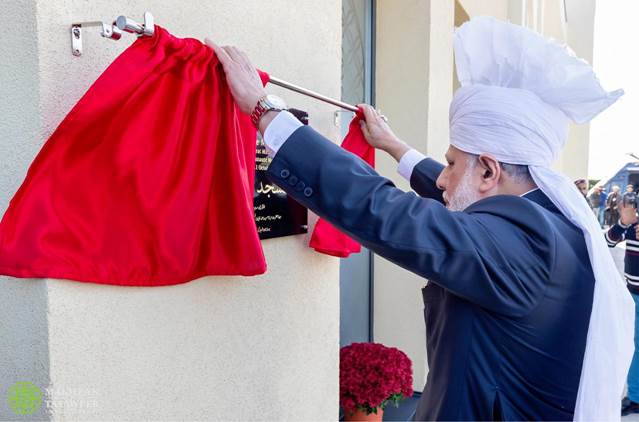 The Mosque has a capacity of 250 worshipers with further space for overflow in a multipurpose hall. The complex includes car parking, offices, and a guest house.

His Holiness officially inaugurated the Mosque by unveiling a commemorative plaque and offering a silent prayer in thanks to God Almighty.

His Holiness then delivered the weekly Friday Sermon from the newly built Mosque in which he outlined the significance of regular worship in the Mosque and seeking righteousness.

Commencing his sermon, His Holiness recited chapter 9 verse 18 of the Holy Quran, which states:

"He alone can keep the Mosques of Allah in a good and flourishing condition who believes in Allah, and the Last Day, and observes Prayer, and pays the Zakat, and fears none but Allah; so these it is who may be among those who reach the goal." 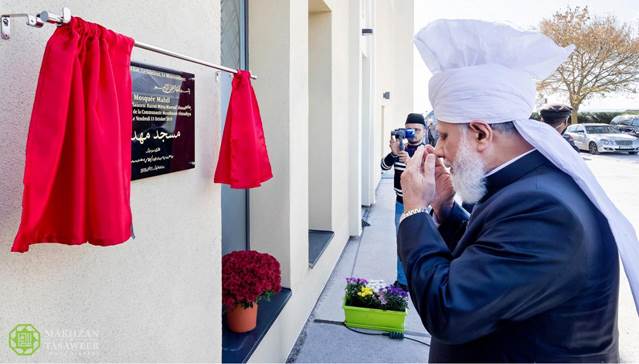 Speaking about the attribute of 'believing in Allah' as stated in the verse, Hazrat Mirza Masroor Ahmad said:

"God Almighty has explained the character of those who build Mosques and inhabit them. They are those who believe in Allah in such a manner that they consider Him to be the Fountain-head and Master of all abilities and powers and they believe that all else in His comparison is worthless. To attain this level of belief it is vital to bow down before Allah the Almighty and worship Him."

"Only those people can benefit from building and inhabiting a Mosque who observe their prayer. They are those who do not built a Mosque merely to show the world that they too have a Mosque, rather they pledge to present themselves within the Mosque five times a day."

Regarding the reward for building Mosques, Hazrat Mirza Masroor Ahmad quoted the Holy Prophet Muhammad (peace and blessings be upon him) who said:

"The one who builds a Mosque for the sake of Allah, Allah the Almighty also builds a similar place for him in heaven."

His Holiness elucidated that whilst building a Mosque is of great virtue, it also requires a person to fulfil the obligations of a Mosque by worshipping at the Mosque regularly.

Mentioning the state of the world and the negative role some Mosques are playing, Hazrat Mirza Masroor Ahmad said: 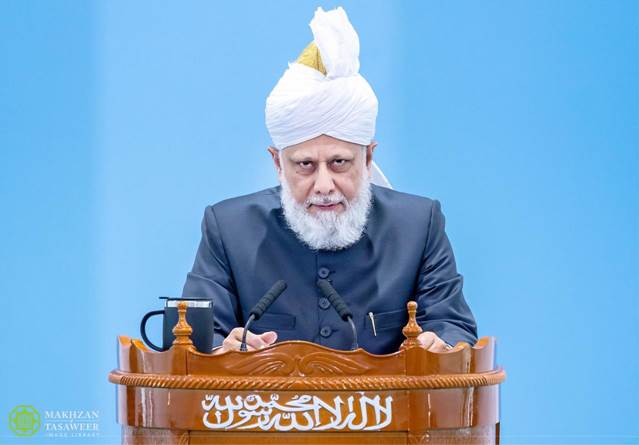 "Thousands of Mosques are built every year across the world by Muslims. However, those Mosques that are teaching sectarianism will never lead their worshippers to heaven. Instead of creating the fear of Allah the Almighty and fulfilling the rights of His creation the Imams and leaders in such Mosques seek only to fulfil their own vested interests or the interests of their particular sects. So-called scholars are creating innovations which have nothing to do with the teachings of the Holy Prophet Muhammad (peace and blessings be upon him)."

"Those people are righteous who are extremely humble. Their speech is not filled with arrogance and they lack all sense of superiority. The Promised Messiah (peace be upon him) states that 'Those who are righteous, their manner of conversing with others is like that of a child speaking to an elder.'" 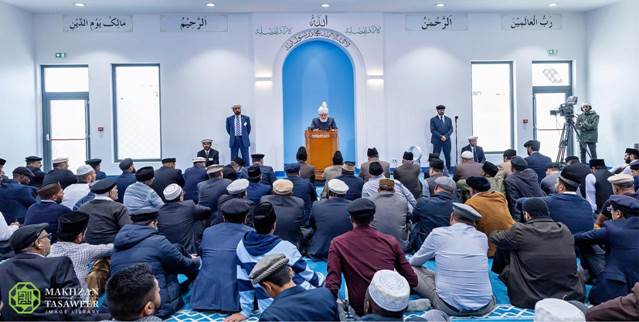 His Holiness also spoke about the unparalleled piety of the Holy Prophet Muhammad (peace and blessings be upon him) and how he was forever inclined to worshipping and helping the creation of Allah the Almighty.

His Holiness also spoke on the philosophy of building Mosques. His Holiness said that Islam desires to create unity amongst all mankind and a Mosque serves as a means towards the fulfilment of that purpose, whereby people gather together regularly and foster ties of friendship with one another which leads to greater unity within society.

Regarding the Strasbourg Mosque, His Holiness praised members of the Ahmadiyya Muslim Youth Association (Majlis Khuddamul Ahmadiyya) of France who had pledged to cover the entire cost of the Mosque. At the same time, His Holiness said that the older Ahmadi Muslim men (Ansar) and Ahmadi Muslim women (Lajna) should not be left behind and should seek to build another Mosque in France within the next three years.

Concluding his address, Hazrat Mirza Masroor Ahmad prayed for the Mosque and those who had contributed to it.

"May Allah bless this new Mosque in every respect and bless those young people who have made sacrifices towards its construction. May Allah not only give them the ability to make financial sacrifices but enable them to also understand the significance of inhabiting the Mosque. May the standards of worship of the youth and the community at large continue to increase."

Following the Friday Sermon and prayers, His Holiness was interviewed by representatives of the local media about the Mosque. 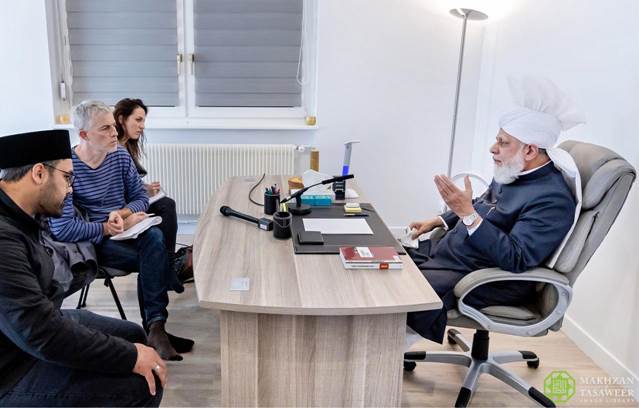